What Is Pirate Radio and How Is It Different? 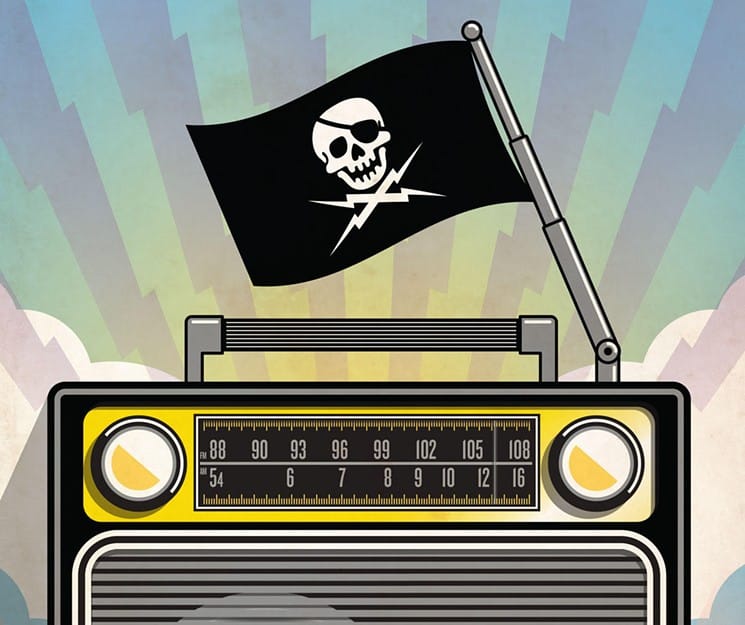 Free Radio Olympia, kicking out the jams on 98.5 fm, is Olympia’s hometown pirate radio collective. What is pirate radio and how is it different from commercial, community, or low-power radio? To begin, the differences include legality, broadcast power/signal reach, support base, and programming.

Commercial radio stations technically support themselves wit advertising. They also make deals with record labels to target “listener markets” with crappy music and crappier commercials. This partnership is lucrative for them and for the record labels.

The cycle goes something like this: a consumer hears a pop song on the radio. It’s catchy and cute so she buys the album, which is mostly filler. The majority of her $17 is pure profit for the record company. They use some of the profit to find or create another one-hit wonder who will only get a tiny percentage of her $17 and pay the radio stations to play the new single. She hears it on the radio and buys it…

Deals with the record labels also control the quality and type of music programming available to commercial radio stations. Many stations no longer have even national news or traffic and weather reports. They rely more on pre-recorded announcements than live dj’s. Most commercial stations are owned by large media conglomerates such as ClearChannel. ClearChannel owns more than 1200 radio stations nationally as well as billboards, PR companies, and music venues. ClearChannel goes the extra step to record dj’s in one location using slang specific to each area and talking about the local bars in each city to play on their radio stations across the nation. In the physical studios, an intern can press a button to play the pre-recorded chatter. Clear Channel exercises this control in their music venues as well and will only produce shows with radio pop bands, as well as bullying local venues into shutting down.

Some of the commercial radio stations have existed since the “Broadcasting Boom” of the 1920’s. Radio programming before the boom was very experimental. The first standardized and networked broadcasts were developed in the ’20’s, but most stations had local news and entertainment. However, independent programming has virtually disappeared since the roaring 20’s as corporations rather than local communities now determine American culture.

Community radio stations originated as Class D non-commercial educational licenses. These licenses were created to bring experimental programming from educational institutions to the airwaves. They were first issued in 1948 and began as 10-watt stations. Eventually the regulation changed to 1-100 watts.

In 1967 The Public Broadcasting Act birthed the Corporation for Public Broadcasting (CPB), and three years later, National Public Radio. The idea for the NPR network was “school on the airwaves,” providing programming unavailable on commercial stations. NPR was much more organized and formulated and eventually was preferred to the experimental formats broadcast on the Class D stations run by the schools. By 1978, the CPB, though created to “fund alternatives to commercial television and radio,” had successfully convinced the FCC that Class D licenses were a waste of radio space. The FCC eliminated any further Class D awards and required that those already in existence had to upgrade above 100 watts, move out of the 88-92 MHz non-commercial educational sector of thedial to the commercial sector from 93-108 MHz, or be shut down.

KBCS in Bellevue, KAOS in Olympia, and KBOO in Portland are examples of Class D stations that still exist. They are supported by community members and colleges. They have no advertisements. They are almost entirely volunteer-run, and have a programming format that invites participation from the community. The programming format is often set up in 2-4 hour blocks in which dj’s have their special show. The shows can be weekly or daily, and include a variety of music, discussion, national, and local news. Many of the Class D licenses that survived the cut off have streamlined their format to coincide with the NPR format, under pressure from the FCC and the NAB.

Micro-radio describes all stations broadcasting at or under 100 watts. All Low-Power FM (LPFM) stations and most pirate radio stations fall into this category. LPFM is a micro-radio licensing scheme that the FCC created in response to the growth of pirate radio nationally. The original plan allowed for 1,000 new licensed stations. The FM dial could encompass 300,000 or more low-power stations nationally. However, NPR and the National Association of Broadcasters (NAB) lobbied the FCC to gut the proposal to 250-500 stations. They also raised concerns about broadcast interference and mandated that the stations be set in third-adjacency positions. Most pirate radio stations operate at second adjacency, which means that if the commercial station is at 96.5, the pirate is at 96.9. There are rarely interference problems. However, the FCC set the regulation to third-adjacency, which means that if the commercial stations are at 96.5 and 97.7, the LPFM station can claim 97.1. But if there are no such third adjacency spots open, there can be no LPFM stations. In a metropolitan area such as Seattle, there are no open third-adjacency frequencies. There are, however, 13 second-adjacency frequencies.

LPFM is a very new license category. In the year 2000 the FCC began issuing the licenses. Most LPFM stations are in rural or low populated areas. Olympia has an LPFM station, KOWA 106.5 fm, with a solar-powered transmitter operated by Media Island. It is not yet fully operational. [as of Dec. 1, 2004] The process of obtaining the license includes purchasing thousands of dollars of FCC-approved equipment, as well as the thousands of dollars the license itself costs.

Though both LPFM and pirate radio are micro-radio, LPFM is legal and politically neutered by catering to a cultural and political hegemony. LPFM split the pirate radio community. Some pirates now work with the government to set up the licensed micro radio stations, while some continue to operate their illegal community stations.

Amateur broadcast radio was originally banned in 1921. The class D licenses provided a space on the fm dial for community and experimental programming until they were eradicated in 1978. There were very few, if any, illegal fm stations in the US during this time. In Britain, however, in 1964 the first pirate radio was broadcast off the shore on ships protesting the BBC monopoly. In 1973, a ship off the coast of New Jersey broadcast for one day before the FCC shut it down. In the mid-late 1980’s a pirate radio movement began in the vacuum left by the FCC when it decided to make community radio illegal. Felonious community micro-radio appeared all over the US from Florida to Berkeley. Pirate radio not only is a felony, but also highly political, experimental, and entirely run and monetarily supported by volunteers who are dedicated to community empowerment.

Free Radio Olympia 98.5 fm is currently operating at 100 watts. The goal of FRO is to “provide information and education to the community by offering diverse music, alternative commentary, and news programs. The content and nature of free radio Olympia broadcast is determined by whoever feels the need and desire for expression
on the airwaves….

“In order for the radio to be used effectively as a tool by the community, we feel that participation is necessary. Micro-radio offers the community a means for outreach, to communicate and unify. We oppose the corporatization of radio as an effort to privatize what should be a public service. In addition, we believe that the FCC’s efforts toward LPFM operations have failed to serve the needs of the community due to the expensive and inaccessible nature of licensing. In the form of direct action, and a challenge to the so-called “authorities”, we transmit without a license over public airwaves.” FRO does this with very little capital and incredible dedication from the members of the collective. All decisions are made by consensus, and all programmers are in charge of their material.